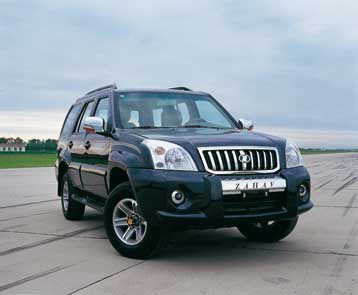 The local automobile media last week put to the test a sizeable number of Zahav Automobile product range during a guided media tour of the plant facility at Ikotun-Egbe – a suburb in Lagos, where motoring journalists, for the first time, experienced the performance; road handling, fuel efficiency and adaptability of the locally assembled Chinese engineered vehicles.

Mr. Kumar explained that the plant which was built with installed capacity for 12, 000 vehicles annually currently produces 20% of its installed capacity owing to inadequate  demand but added that the Ikotun based Zahav plant would commence activity  fully soon as the Federal Government wholly  implements the National Automotive Industry Development Plan (NAIDP) with definitive restrictions on used import vehicles.

He explained that the plant has the capacity to double its production if demand increases. “The Zahav plant engages 45 indigenous technicians and experts in one shift to produce competitively priced vehicles that are priced 20% cheaper that its Korean rivals,” Mr. Kumar noted.

The quality assurance manager also said: “The Changan sedan was designed by Italian Carminati Stefano and currently produces 2.8 million cars per annum to rank among foremost selling vehicles in China while the BAIC Group who recently acquired Swedish SAAB technology for styling and power-train is rated No. 5 largest automotive groups in China.”

Kumar said the Zahav plant would cater for the teeming demands of the upwardly mobile, middle income earners and start-up businesses without sacrificing quality, elegance and durability.

Also adding that the Zahav automobile range is a perfect choice for work and leisure, the Zahav Automobile Company head of sales and marketing, Sanjay Rupani said: “though the vehicles are of Chinese extraction, they all inherit the DNA of renowned automobile manufacturers – Daimler Automotive Company and Cummins Engine Company.

Mr. Rupani described the  vehicles as ergonomically designed with an ideal mix of style, practicality and attractive lines like the American and Japanese styled cars to woo discerning drivers who want exceptionally trendy kind of vehicles.